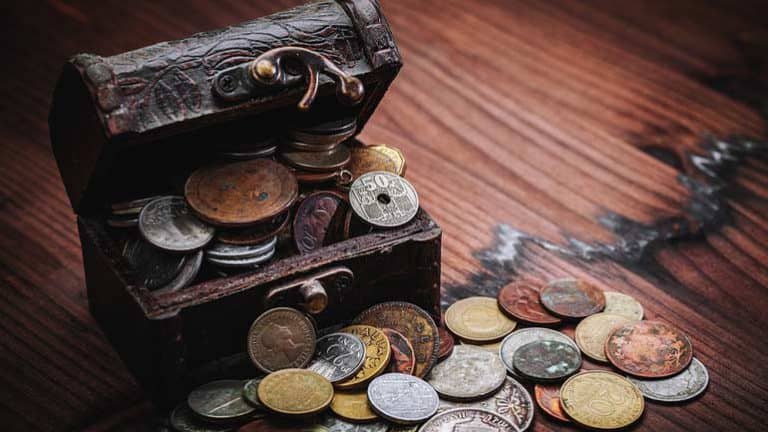 Nearly everyone in the world uses some form of it, but most people aren’t aware of the history of money. I think if you understand where it came from it can help you understand its future.

To begin I think you should know a few facts about money and currency.

First, the paper money you carry in your pocket today has no value whatsoever. By itself it’s only worth as much as the paper its printed on, but it is used as a substitute for a government’s promise to pay their debt.

Until 1971 you could exchange US dollars for gold. Until 1965 our coins still had silver in them. As we moved away from the gold standard and precious metals the government is able to print more and more money.

The history of money begins shortly after the dawn of civilization when one cave man needed a spear and another needed animal hides so they made a trade.

Bartered items had intrinsic value themselves and larger villages would use staple foods such as grains as a measure of value. Shekels used by Anatolian traders were marked with the unit of grain they could be exchanged for.

Other cultures used livestock as an early measure of value. Cattle, goats, and sheep were all used as an early standard for trading.

Since bartering depends on a coincidence of wants it is hypothesized that early trading was done on the basis of a gift economy or recording debt. Early monetary systems were developed to optimize the process of bartering.

The earliest form of money in history as we know it today was cowrie shells. The use of cowrie shells dates back to 1200 B.C. and evidence has been found of their use in several Asian and African countries.

These were considered commodity money, or money whose value comes from the commodity from which it is made.

There are 5 traits of commodity money.

The first metal coins were used in China and were made in the shape of cowrie out of bronze and copper. Around 770 B.C. we start to see miniature tool money, which was cast in copper and bronze, used to represent the equivalent value of the tool it was shaped like.

These early forms of metal currency eventually evolved into the round shaped coins we use today. Some early Chinese coins had a hole punched through the center so they could be strung on a necklace.

In 600 B.C. the King of Lydia, Alyattes, minted the first modern coins. Lydia was located in what is today western Turkey. These coins were made of electrum which is a naturally occurring mixture of gold and silver and were stamped with pictures of animals that acted as denominations.

The availability of an officially recognized currency allowed Lydia to increase domestic and international trade. Lydia became one of the richest empires in Asia Minor.

Coins worked so well that they were adopted and refined by the Greeks, Persians, Macedonians and the Romans. Before the edges of coins were knurled and beveled people would break small pieces of coins off for payment. Some governments would do this as a form of taxation.

Another way governments stretched their coinage was by the practice of debasement. By reducing the amount of precious metals contained in minted coins they could stretch the value of their currency. The currency of France was debased every 20 months for 20 years.

The first recorded use of banknotes was in China where square pieces of white deerskin with colorful borders was used as early as the 2nd century A.D. China developed the first paper money in history around the 8th or 9th century A.D.

By the time Marco Polo traveled to China along the silk road in the 13th century the Emperor had a robust monetary system in place. Instead of “In God We Trust” China’s early paper money said “Those Who Are Counterfeiting Will Be Decapitated”.

Several European countries used coins up until the 16th century. As international trade evolved Italian bankers such as the Medici started issuing promissory notes instead of exchanging vast sums of gold or silver.

Instead of transporting gold for payments the Medici would collateralize the debt of merchants they had a history of business with. Other merchants began to trust the promissory notes of the bankers.

Goldsmiths soon realized that large amounts of gold owned by their clients were collecting dust in storage since they no longer needed to send the physical gold for payments. The goldsmiths started to make loans with the gold, but soon realized that they could also print paper certificates that promised repayment; as long as people trusted the goldsmith their certificates were widely accepted.

As European countries fought wars against each other they started to look to borrow from banking families and goldsmiths against their future tax revenues. This was the beginning of deficit spending and what would become the modern monetary system.

The first central bank was established in 1668 in Sweden. The Sveriges Riksbank wasn’t allowed to print bank notes until 1701 because its predecessor Stockholms Banco had collapsed due to issuing too many notes without collateral.

In the 1740s counterfeit bank notes started appearing in Sweden. The Riksbank developed the Tumba Bruk, a specialized printer with their own paper to manufacture Swedish Krona bank notes that were harder to duplicate.

In 1694 England established a central bank to fund a war against France. William Patterson devised the plan in 1691 to fund the reconstruction of the royal fleet.

England tried to borrow the funds from other lenders, but their low credit rating was a hurdle. After establishing the Bank of England it only took them 12 days to raise the $1.2 million needed for the fleet.

The central bank set monetary policy and issued bank notes. The bank was privately owned by stockholders from 1694 until 1946 when the Attlee Ministry had it nationalized. In 1998 the Bank of England became an independent public organization in 1998 wholly owned by the Treasury Solicitor on behalf of the government.

Between 1781-1907 banking in the US was diversified. In 1913 the US created the federal reserve which could strategically expand and contract the supply of federal notes in circulation to stabilize the economy.

Much of the world had operated on the gold standard which used gold to value all other items and currencies.

In 1929 the great depression was the first true test of US monetary policy. In a few short years the federal reserve had printed all the money that it could and in 1933 President Roosevelt issued an executive order that required all US residents to sell their gold to the Federal Reserve bank.

He also purchased large amounts of gold from other countries with US dollars.

Using executive power Roosevelt then doubled the price of gold exponentially expanding the wealth of the U.S. government over the next decade.

In 1936 the U.S. built the United States Bullion Depository at Fort Knox. The location was chosen to move the country’s supply of precious metals away from coastal cities like New York and Philadelphia.

Nestled in the Kentucky countryside behind the Appalachian Mountains Fort Knox seemed like a much more secure location for valuables in 1939 when a second World War with Germany seemed imminent. Several allies sent their bullion to Fort Knox for safe keeping.

After WWII the US Dollar became the most stable currency in the world. This led many countries to tie their currencies to the dollar, which was in turn tied to physical gold.

The US had a long standing agreement that other countries could purchase US dollars with gold and then exchange them back for the gold that was purchased.

The End of the Gold Standard

In the 1960s the US and many other countries debased their currencies to the point that they would no longer contain precious metals. This lead to several countries asking to trade their US dollars back for gold and questioning their currency’s value against the US dollar.

Several countries started to call in their right to convert dollars to gold. In 1971 Richard Nixon ended the gold standard and the US dollar’s convertibility to Gold. Since most countries had tied the value of their currencies to the US dollar they were pressured into supporting Nixon’s policies.

Since then US dollar has been backed by faith and trust in the US government. Future taxes from the earnings of US citizens are used as collateral against debt issued in the form of dollars by the Federal Reserve.

Without the burden of keeping gold on hand to cover all of the US Dollars the new fiat currency could be printed at will.

The Federal Reserve can now issue more bank notes to stimulate the economy. Prior to the end of the gold standard they could only adjust interest rates and cycles of boom and bust were inevitable. The cyclic nature of the economy wasn’t ideal, but it allowed the market to address economic bubbles that were forming.

According to modern theory money is a public monopoly that is managed by the government. Unemployment and inflation are used as indicators that the government is printing too much or overly restricting the flow of new money.

In 2009 after the collapse of the housing market in the U.S. Satoshi Nakamoto started developing Bitcoin. Bitcoin had solved several problems cryptographers had encountered when trying to develop a decentralized and secure digital currency.

Through the use of blockchain Bitcoin uses hundreds of computers to verify and record transactions. It quickly became the standard for all digital currencies, and one of the biggest disruptive technologies in the history of money.

Bitcoin continued to grow in popularity until 2018 when the market crashed from an all time high of $18,000 per coin. There are several competitors to Bitcoin. Some have addressed transaction speed and cost, two criticisms that Bitcoin has repeatedly faced.

It is yet to be seen if one Cryptocurrency will overtake the rest or if an ecosystem of hundreds of currencies will continue to grow further. Some investors believe Bitcoin is a scam while others such as Jack Dorsey are very positive about its usefulness and future growth. Many governments are looking into issuing their own digital currency and large corporations are working on cryptocurrencies that are less volatile or altogether stable.

Many stable coins like the Dao, Tether and USDC are tied directly to the value of the U.S. dollar. Facebook is developing a less volatile coin the Libra for use across the world.

Many governments have already started regulating cryptocurrency. The European Union plans on having comprehensive cryptocurrency regulations by 2024.

When compared to gold, the US dollar, and other currencies Bitcoin is seemingly superior in every way.

This scarcity, and ultimately their underlying value, is defined by the limited available supply and the labor required to extract each. This “proof of work” is exhibited by the back breaking labor a gold miner went through to dig the gold from the earth and both the electricity and computations used by computers to mine Bitcoin.

The Future of Currency

We have been transitioning to digital transactions for the past several decades with the Visa network, wire transfers, and online shopping. New cryptocurrencies add extra layers of security and verifiability while taking control from financial institutions and giving it to the users of the network.

Many governments will not want to part with their ability to manage fiscal crises simply by printing more money, but increasing federal debt and a growing distrust in centralized power has created an ecosystem where they may soon have no choice.

One way or the other we are likely to switch to currencies which are primarily digital in the next 2 decades.

Still most people believe that there will always be a place for gold and silver unless scientists discover ways to replicate them on a molecular level.

No matter what people will always need  currencies to make transactions more efficient and store wealth whether we use Bitcoin, paper dollars, or cowrie shells.