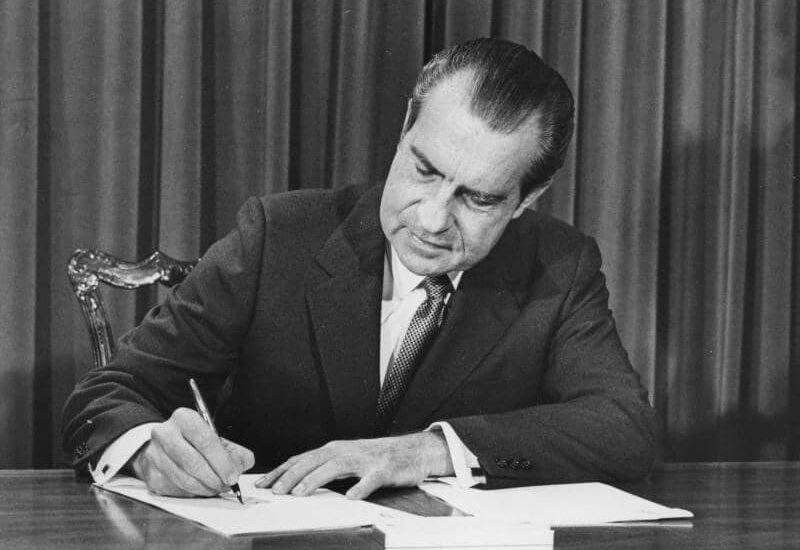 Gold has been the most universally accepted currency in the history of the world, and up until 1971 the markets effectively used gold as a measure to price everything else.

It began in the middle ages when bankers started issuing notes backed by gold held at a central location to further divide and easily transport wealth.

When Franklin Delano Roosevelt tied the US Dollar to gold and recognized its convertibility the United States saw a stable and unprecedented growth of their economy and improvement in the average American’s lifestyle.

The End of The Gold Standard

In 1971 when a few countries tried buying back their gold with dollars President Richard Nixon effectively ended the gold standard making the US Dollar a fiat currency backed only by the faith and trust in the US government.

Since the entire world had tied their own currency to the US dollar based on its convertibility to gold it was their interest to keep the dollar propped up.

In the decades that followed economists and politicians realized that their unchecked power to issue new currency would allow them to manipulate the economy at an unprecedented level. This has led to widespread debasement, increased inflation and exponential gains for the rich that depend on market performance to increase their wealth.

The average person does not realize the far reaching effects of Ending the Gold Standard has on their livelihood. Market effects are often postponed and the price reactions take years to fully realize. Socio-economists have started to look at other statistics to illustrate the effects that stimulus packages, bailouts and currency manipulation have on the average person.

Of course now that we are no longer obligated to back up our currency with gold the government has printed money every time there is a ripple in the economic pond. Increasing federal debt is one of the most obvious effects of Ending the Gold Standard.

Bailouts, stimulus checks, quantitative easing, there are many terms for printing money but the end result is all the same. We put it on the books as debt to central banks and make interest payments on it.

The increasing national debt is just the most apparent effect and really just the beginning. 2020 has been a record year for federal debt accumulation.

Inflation is roughly defined as the buying power of your dollars. The government uses CPI to measure inflation annually but they’ve been known to manipulate the numbers to make it more favorable for their reporting and policy.

Inflation hurts the average American the most in the cost of everyday goods. Groceries and utilities have increased substantially in price as an effect of ending the gold standard.

Banking Crises Has Increased The World Over

Think of gold as a rev limiter for the economy. Without it politicians can create as much currency as they want and since bankers know they can be bailed out they are a lot more careless with their policy.

A healthy middle class is good for everyone in the country. By keeping the most people happy as possible politicians can keep their jobs longer and opportunities arise for everyone because there is a greater number of citizens with disposable income.

This graph shows that wealth is accumulating somewhere, just not proportionally across income brackets. It would be in the best interest of the super wealthy to find ways to start diverting some of their wealth back into the middle class. Their longevity depends on it.

Wages Have Stagnated For Most Americans

Even though inflation has increased the price of goods wages haven’t kept pace.

The GDP has likewise increased steadily since World War II. It’s not just because of modernization. GDP per full time employee has increased at a substantial pace as well, but earnings have stagnated.

Things really start to get scary when you look at some of the statistics sociologists have been keeping.

At face value one by one they seem like correlations that have no relation to our monetary policy. It’s when you start to see the same pattern over and over that it starts to become apparent that the effects of Ending the Gold Standard may reach farther than any other single facet of government.

When you notice that the divorce rates started increasing sharply across all age groups in 1971 you could attribute it to a number of things. The pay gap is closing so more women can support themselves, the stigma of divorce has faded, breakthroughs in criminal science have made it easier to convict perpetrators of domestic violence.

However it shouldn’t surprise anyone that the number one reason for divorce is money problems. Financial issues are much more prevalent, about as prevalent as the increase in the divorce rate.

Who would have thought that President Nixon was to blame for our kids being overweight? There are many direct and indirect factors that could stem from the changes in monetary policy you could make an argument for here. I believe that the primary perpetrator is inflation and the ability of big corporations to leverage their wealth.

Since there is bigger margins in unhealthy foods they’ve become a staple of American progress.

It is possible that monetary policy not only kickstarted this trend but also plays a part in the war on drugs and for making the US a target for drug traffickers. Our economy exploded in the 1980s and 1990s at an unsustainable pitch and cocaine powered the machine for part of that era.

Who would have thought that you could blame the riots in 2020 on monetary policy adopted in 1971? African Americans made great progress after the civil rights movement of the 1960s. The wage gap was closing at a precipitous pace until 1971 when it hit a ceiling at about 70% of white employees.

Moving Out of Your Parent’s House

After the great depression more and more Americans achieved the dream of home ownership. This trend continued until 1971 when the trend completely reversed. In 2014 for the first time in 50 years 30% of adults between the ages of 25-29 were again living in their parent’s house.

Monetary policy hasn’t just made obstacles for people to get to where they’re going, it has lead to a failure to launch for 1/3 of all young adults.

Possibly the most annoying and vile effect of all this is the extremist stances taken by both political parties. 2020 has been the most vitriolic and sad season in American politics.

Let’s make this clear though – this isn’t a partisan problem. It wasn’t Nixon’s fault that the US couldn’t pay back all of the gold it owed other nations. This is a problem created by both parties and both have manipulated our fiat currency excessively ever since.

The world economy is far too complicated to reverse all of this madness at this point. The only way out is for the whole thing to implode. The important thing is that we learn from the effects of Ending the Gold Standard and keep repeating bad decisions.